Exam Details  –  Department of Examinations
Applications are called from citizens of So Lanka who have qualifications for the following exam.

2.0 This examination shall be held in Colombo in month of December 2017 by the Commissioner General of Examinations and the applicants who have satisfied qualifications based on the merit on the results of this
examination shall be selected for appointment to the posts in Grade III of Sri Lanka Government Librarians’ Service.

3.0 Number of applicants appointed and the effective date of appointment will be determined by the Director General of Combined Services. The Appointing Authority reserves the right to fill a certain number of vacancies or not to fill any of the vacancies.

5.0 This post is permanent and pensionable. The pension and the pension scheme entitled to the officers
appointed to Grade III of Sri Lanka Librarians’ Service shall be determined in accordance with the policy decision made by the Government in future.

I. An officer appointed to the Grade III of Sri Lanka Librarians’ Service on the results of the Open Competitive Examination shall be subjected to a probation period of three (03) years from the date of appointment. If an officer passes the First Efficiency Bar Examination conducted by the Commissioner General of Examinations and the Head of the Department is satisfied to the effect that his/her work, conduct and attendance are satisfactory, it shall be informed to the Director General of Combined Services at the end of three years and the Director General of Combined Services shall confirm the officer in the post, of he is also satisfied on the same.

II. The officer shall compulsorily serve at the service station to which he/she is appointed at first for three years. However, the Appointing Authority reserves the right to transfer any officer before the lapse of said period, on special reasons as determined by the same, if it is required to make such transfer.

III. The officer is required to obtain the proficiency in the prescribed official language before the lapse of 05 years from the date of appointment as per the Public Administration Circular No. 01/2014.

Applicants are required to possess following qualifications for recruitment to posts in Grade III of Sri Lanka Government Librarians’ Service :

(a) S hall be a citizen of Sri Lanka,
(b) A pplicants shall be of excellent character,
(c) S hall be not less than 18 years and not more than 45 years of age as at the closing date of

I . S hall have passed the G. C. E. (O/L) Examination with six (06) subjects including credit passes for Sinhala/Tamil/ English and Mathematics and two other subjects at one sitting ;

I . S hall have completed the three-year diploma in Library Science from at a university recognized by the University

III. Shall have acquired a higher qualifications in Library Science than the (i) and (ii) qualifications above. (Such qualifications shall be determined by the Director General of Combined Services communicating
with the authorities of the relevant universities and Sri Lanka Library Association).

(i) It is compulsory that all the applicants should satisfy all the relevant qualifications on or before the closing date of the application.

(ii) Every applicant shall be physically and mentally fit in every aspect to perform the duties of the post and to serve in any part of Sri Lanka. 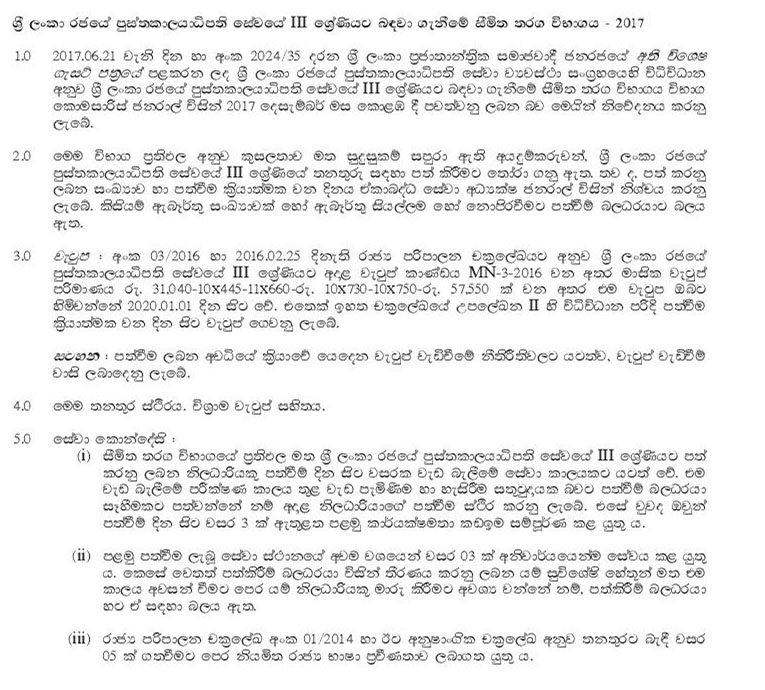 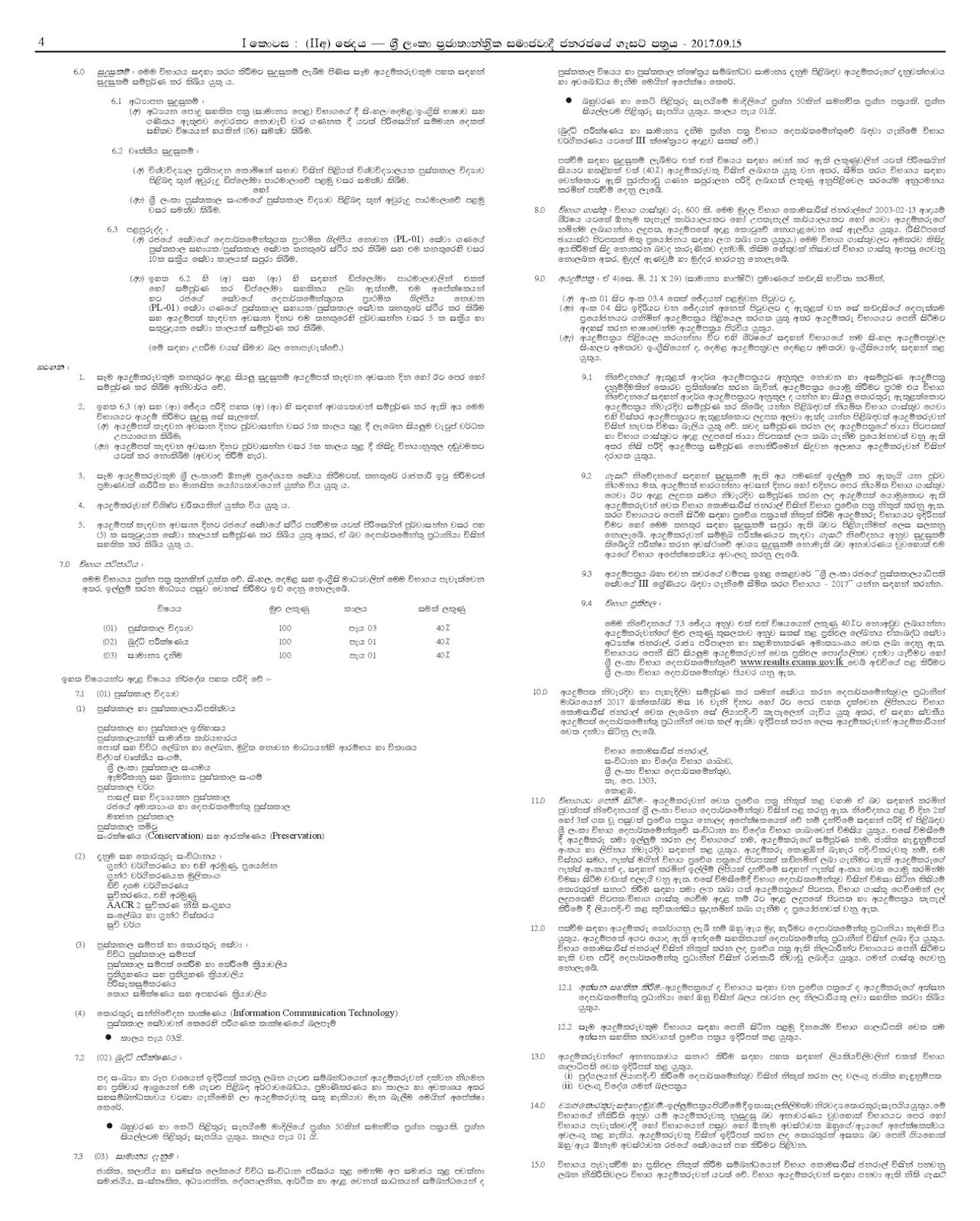 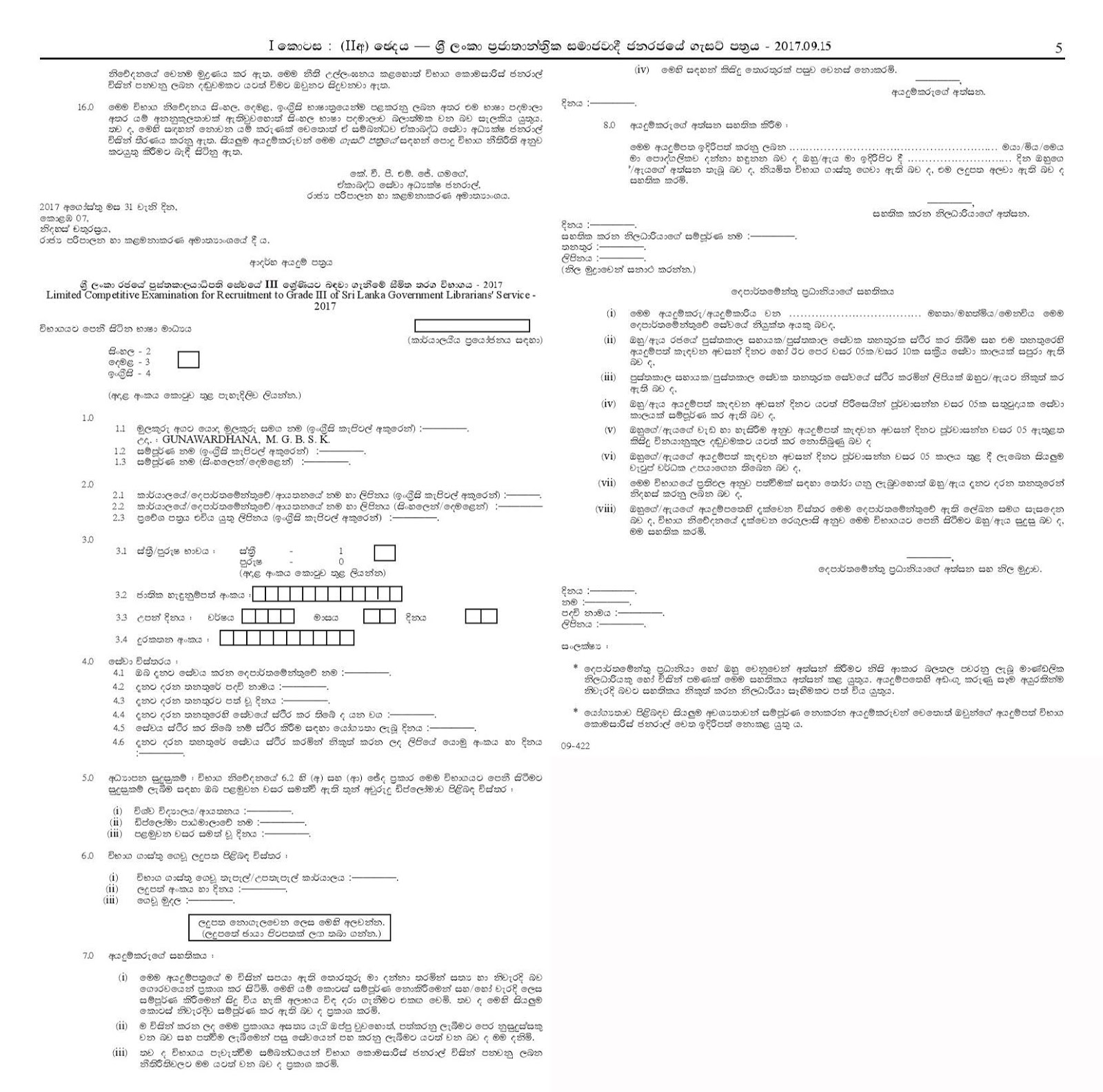